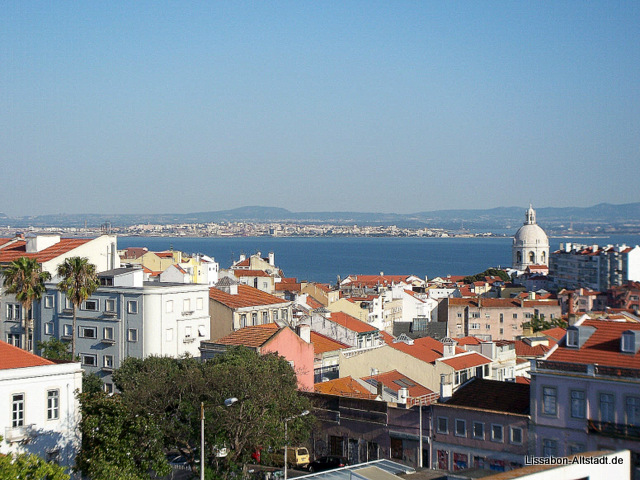 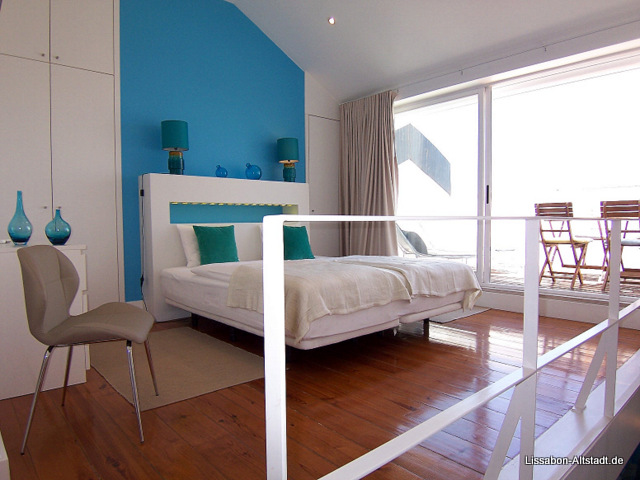 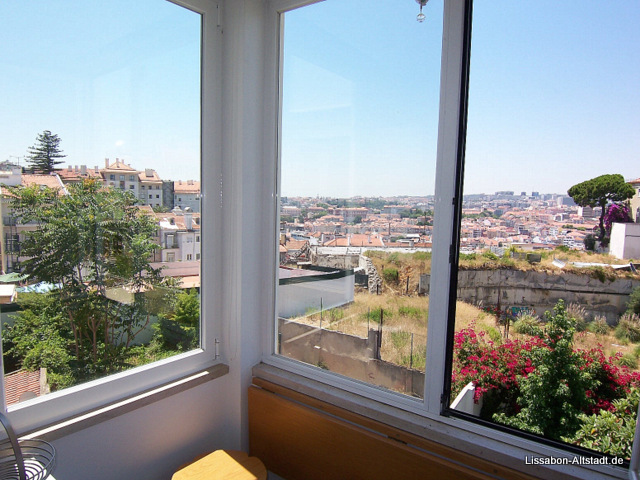 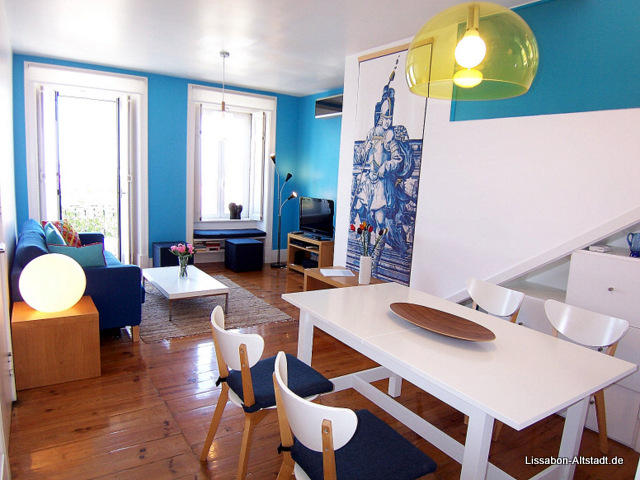 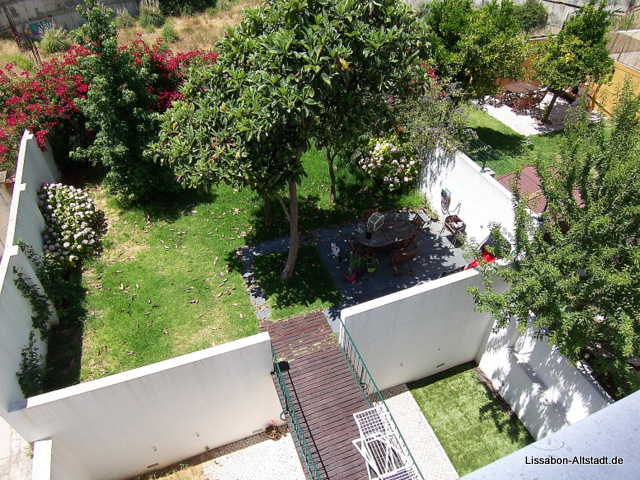 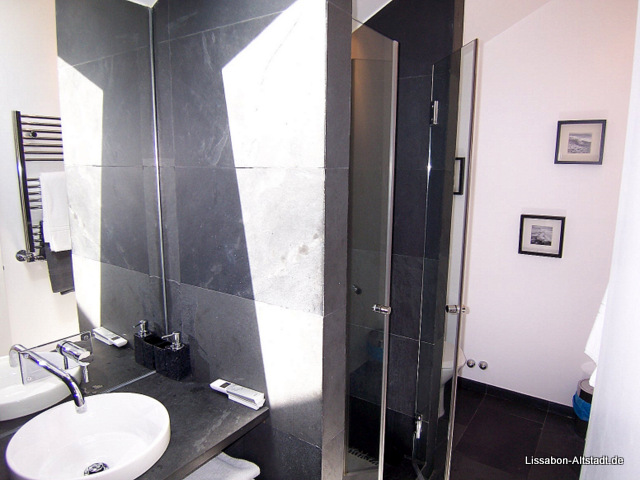 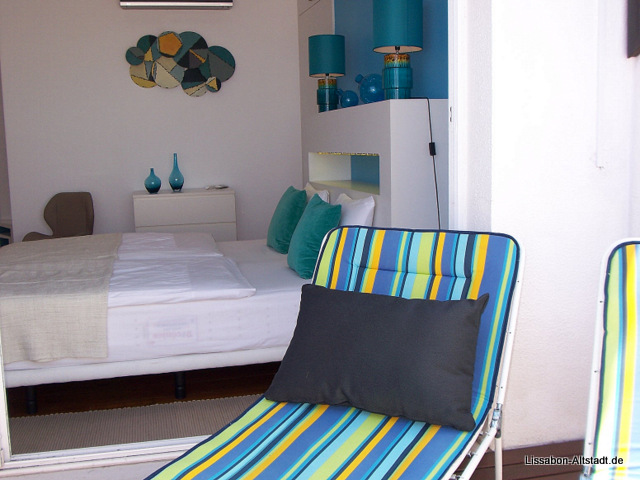 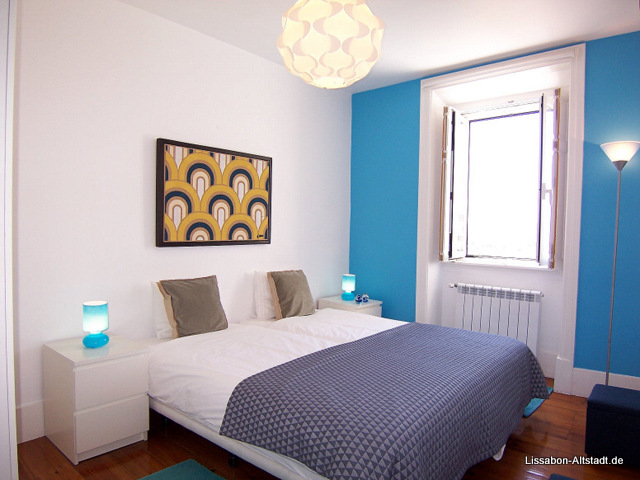 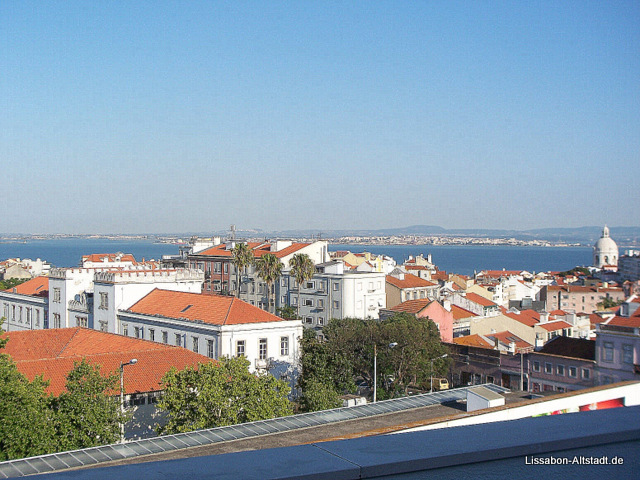 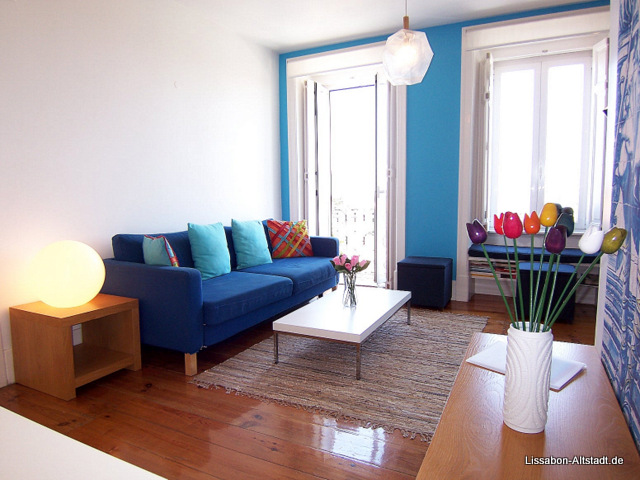 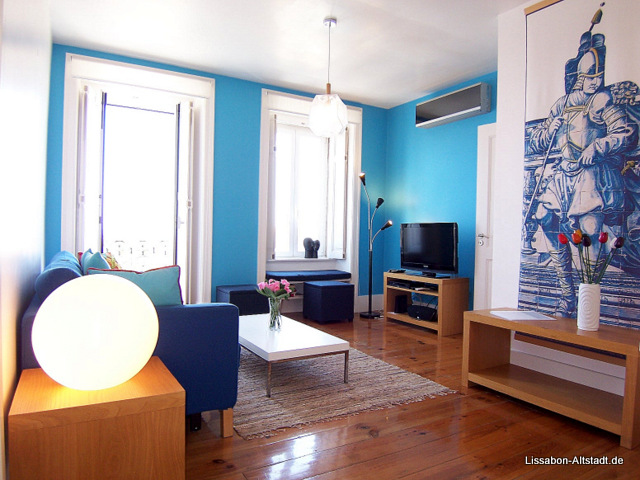 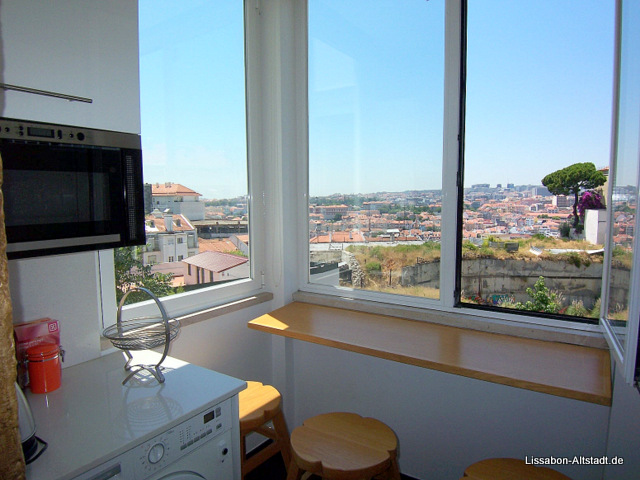 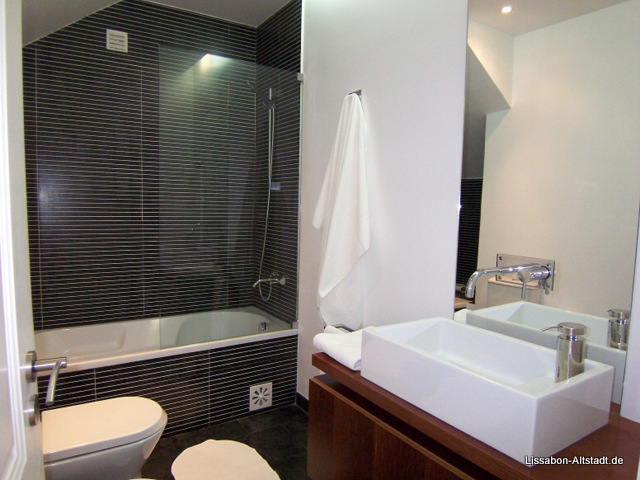 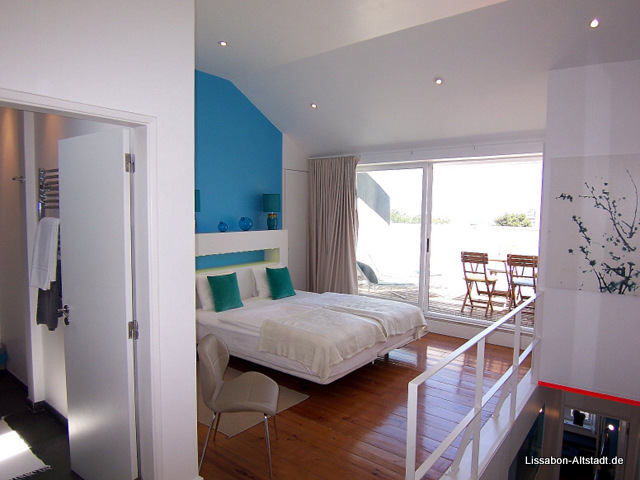 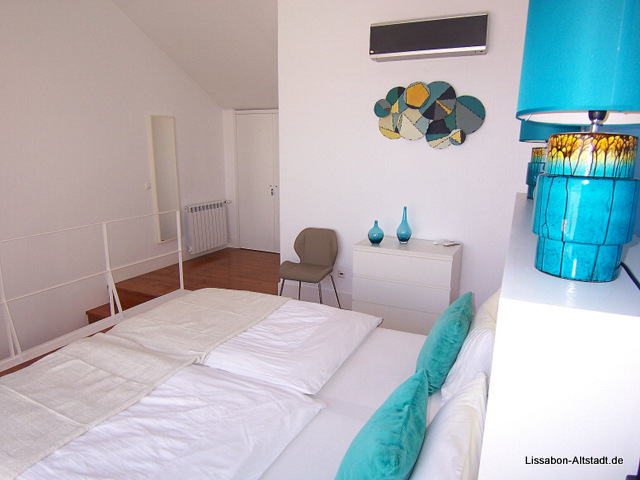 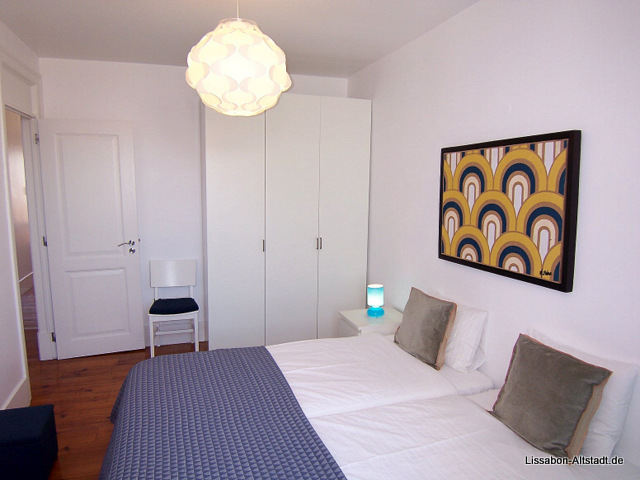 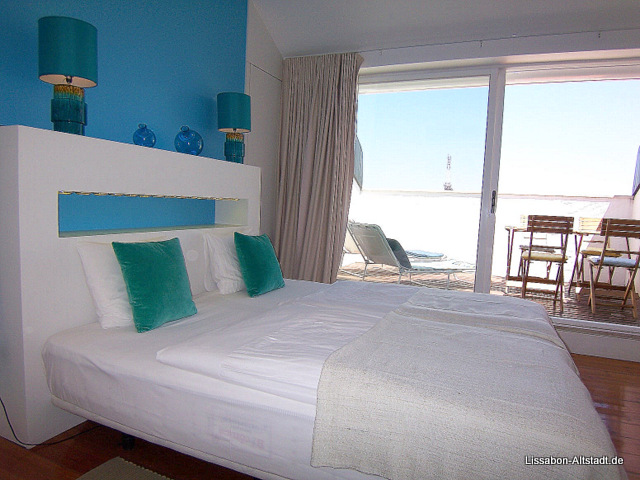 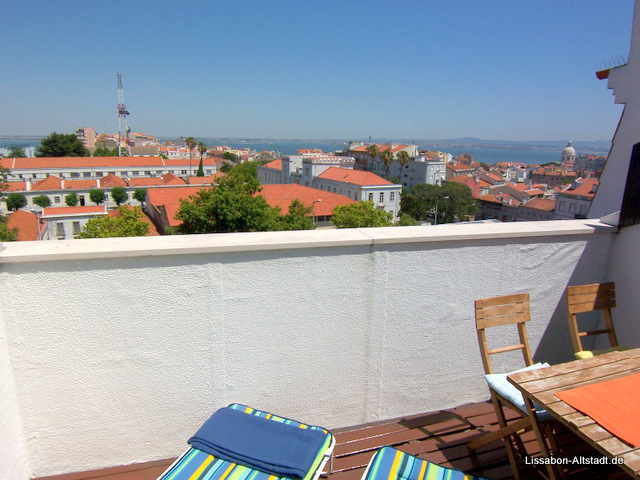 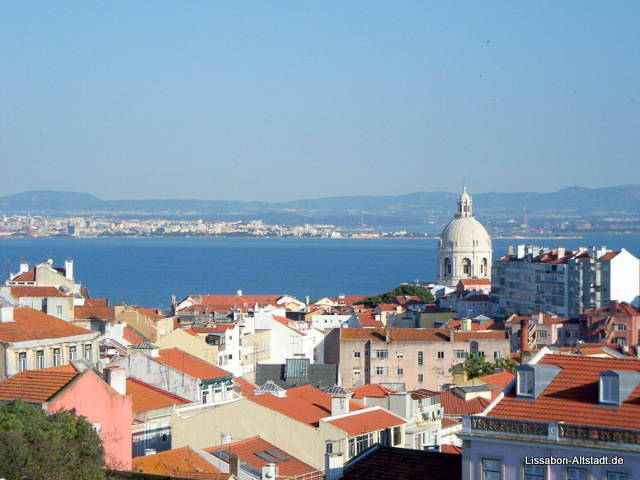 This two-level apartment, renovated and redecorated in 2017, is located on the top floors of a building on the Graça border, in an area that is essentially on the crest of a hill: this particular location allows you to view the city to the West, and the river from the apartment’s eastern windows and terrace. This terrace is hidden from the outside, a private spot to enjoy sunbathing in the morning, some drinks in the shade in the afternoon, and even dinner at night, using the terrace floor lighting. The rooms have been decorated with a palette of bright colours such as blue, yellow and orange, while the white walls and the wooden floors keep the whole atmosphere soft and relaxing. Enjoy the modern conveniences offered with the flat, including cable TV with several foreign channels and WiFi Internet.

Though not directly served by underground trains, the apartment is located near the routes of several buses, offering direct connections to many important areas of the city; you may be especially interested in tram 28E, which has stops about one minute down the road from the apartment building. This tram is a tourist favourite, as its route is a succession of steep climbs up the many hills of Lisbon, each followed by a dip which is just as exciting: enjoy a ride as the tram goes rolling through the narrow streets of Alfama, approaches the S. Jorge castle, plunges into Baixa, passes by Chiado and Bairro Alto, and so on.

A few words on Graça: it is a historic quarter of Lisbon, a stone’s throw from the better known Alfama and Castle areas (as well as S. Vicente, with its famous “Feira da Ladra” flea market); moreover, it has its own tourist attractions, including the church by the same name, Igreja da Graça, and two beautiful “miradouros”, Graça and Nossa Senhora do Monte: these are excellent vantage points, both during the day and the night, to take in the heart of the city below and capture its beauty with your eyes and your camera. And then, there’s Graça itself, its main street filled with a variety of shops and a wide range of restaurants and cafés: from the old traditional “tasca” where fado is played on weekends, to new stylish venues offering scrumptious locally produced pastries and sweets.

Upon arrival you'll receive the apartment keys from your contact person. Our team awaits you at the apartment.

Price per night for 2 persons

When booking, we kindly ask for a deposit. If the arrival cannot take place due to corona, we will credit you the deposit for a later booking.

0131 Graca I
Jeremy from Canada
Superbe appartement ! Très bien situé, calme et fonctionnel L'accueil a été impeccable, avec de bonnes explications. Je recommande :)
0131 Graca I
B. Kaufmann from Naperville
Sara has the gift to make you feel welcome in this beautiful apartment! She is there for you for everything, always with a charming smile! The apartment with a great view to downtown Lisbon was our perfect home. Lisbon is a dream and we count to be back soon, hopefully in this special place.
0131 Graca I
Ulrica Johansson from Helsinki
We spent a wonderful time in Lisbon at Graca I. We knew Lisbon from before, but not this part of the city. We simply loved the vue from the terrace and the possibility of enjoying the sun from early morning. The flat was nice and bright and well equipped and the neighborhood was really charming. Good communications and nice small shops for vegetables and fruit. We were sad to leave this fantastic metropol and hope to be back at Graca area soon again. Obrigada e obrigado Ulrica and Allan
0131 Graca I
R. J. from Oslo
We spent five beautiful days in Lisboa and especially appreciated this very nice apartment. The location is excellent, one step from the front door and you are right in the middle of the beautiful city centre of Lisboa. The apartment is spacious and well equipped, we would always book it again.
0131 Graca I
Elizabeth from Newcastle
We loved our Lisbon apartment. Rodrigo was very helpful in settling us in and orienting us to the neighbourhood. We had everything we needed in the apartment and found the neighbourhood delightful! We enjoyed the views and the terrace at the apartment. Feeling part of the local community is a special part of a true vacation for us. Sitting out on the terrace, putting out laundry like the local, seeing their day to day lives, hearing the rooster crow in the morning, seeing the Birthday party across the courtyard... were all part of the unique experience. Lisbon is a special city, with very unique neighbourhoods. We always felt safe, enjoyed the narrow and cobbled streets, marketplaces, churches, and people. Thank you for a lovely experience.
0131 Graca I
Andrew and Family
Joana was a warm and gracious host. She was eager to provide recommendations for activities and restaurants. The flat was very well appointed, had a beautiful outside area, and was centrally located in a great neighborhood. Witold made our trip run smoothly and was very responsive both before and during our trip. We would visit again and stay in the flat in a heartbeat − great experience overall.
0131 Graca I
Roman from Brno
Excellent contact with owner. Efficient and safe organisation. Value for money and really nice, comfortable apartment with all necessary equipment. Cannot be much better.
0131 Graca I
Valerie
Our mothers had a splendid time in this very luminous and comfortable apartment. This is the second time we asked for the services of Lisbon−holiday−apartments.com and we were not disappointed: everything has been perfect from A to Z. We for sure recommend the team who helped us and facilitated all the information needed to make this trip a wonderful present for our family. Many thanks again and hopefully, see you in Lisbon very soon! 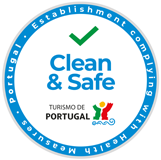 A visit from Axel Prahl

4,6 stars
on Google Reviews
Please select number of persons. Minimum stay are 2 nights, please send us your inquiry for 1 night by e-mail through our contact form. Arrival date is in the past.
We can provide and optimise our services with the help of cookies. By continuing to use the site, you agree to the use of cookies. Find out more.